The Sharks will head into the final round of Vodacom United Rugby Championship group matches as South Africa’s leading contender.

The Sharks, Stormers and Vodacom Bulls all booked spots in the playoffs with hard-fought home victories in the penultimate round of league action, while the Lions also finished their last home match of the season on a high.

In Johannesburg, the Lions stormed back strongly to beat Benetton 37-29, while the Bulls were too strong for Glasgow Warriors, Jake White’s men beating the Scots 29-17 on Friday night in Pretoria.

The Stormers beat Irish giants Leinster by 20-13 on Saturday in Cape Town, but missed out on what could still be a vital four-try bonus point, while the Sharks beat Connacht by 41-21 in Durban to ensure the team from Galway could not get a whitewash against SA teams this season.

Though tied on the same number of log points (56), the Sharks occupy third on the URC log, and the Stormers fourth, courtesy of a superior tally of tries – the Sharks have scored 57 tries this season, one more than the Stormers.

Ulster’s victory over Edinburgh on Saturday night blew the top of the standings wide open, with only three log points separating the teams from second to sixth on the log.

Leinster, on 62 points, cannot be overhauled at the top of the table, but the hosting rights in the other three quarter-finals can still go to any of the teams currently in positions two to six on the log.

Munster, the Sharks and Stormers are all on 56 points, followed by Ulster (55), and the Bulls (53). The final two spots in the top eight belong to Edinburgh and Glasgow, both on 50 points.

If teams are still tied at the end of the final round of matches, the tie-breakers apply in the following order: the number of matches won, points difference, tries scored and then total points on the field of play.

In their final league matches, the Sharks travel to Belfast to face Ulster and the Bulls face the Ospreys in Swansea on Friday, 20 May. The following day, the Dragons host the Lions in Newport before the Stormers and Scarlets clash in Llanelli. 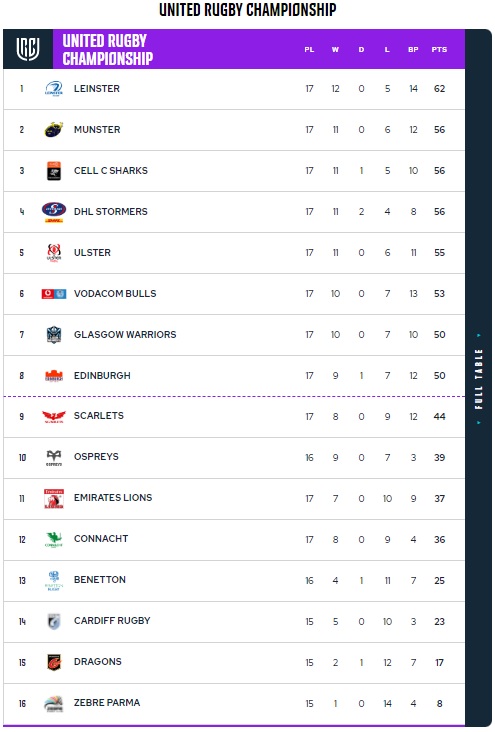