Rassie Erasmus should be a happy man. The win in Salta – which has come off the back of a convincing victory against Australia in Johannesburg and a draw with the All Blacks in Wellington – will fill the Boks with confidence ahead of the World Cup.

For the moment, however, the team should celebrate the fact that their long wait for any sort of trophy is finally over.

The Boks have won the southern hemisphere’s premier tournament for the fourth time. They last won what was then called the Tri-Nations back in 2009.

The Boks’ performances in this installment of the Rugby Championship, and the resultant title, should be viewed as evidence that they are heading in the right direction. While a lot could change in the lead-up to the World Cup, the Boks have given more fancied sides like the All Blacks, Ireland, England and Wales something to think about.

For starters, Erasmus opted to back several second-choice players for the clash in Salta. Captain Siya Kolisi, who made his comeback from injury via the Currie Cup on Friday, would have watched the game on TV.

Despite those selections, the Bok pack hammered the Pumas at the set pieces. The combination of Beast Mtawarira, Bongi Mbonambi and Trevor Nyakane forced the hosts to concede penalty after penalty at the scrum and Pollard’s accurate boot ensured that the visitors translated that dominance into points.

That’s not to say that the Boks were one dimensional or conservative in their approach. Indeed, the call to kick for touch at the end of the half, when they were leading by only four points, was a bold one.

Pollard eventually crashed over and then converted his own try to see South Africa heading to the break with a commanding 24-13 lead. That score was a massive moment in the contest.

The @Springboks have one hand on the #RugbyChampionship trophy as they lead at halftime in Salta. 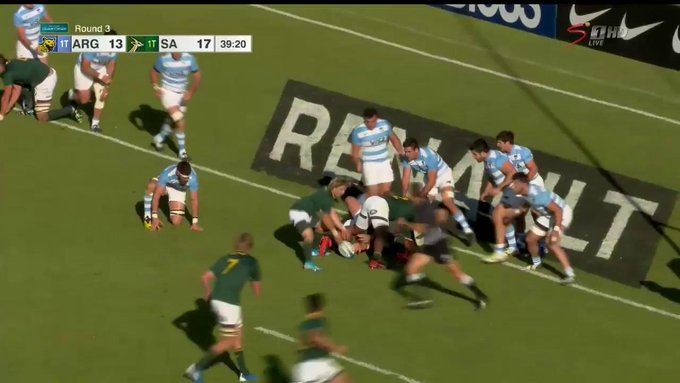 51 people are talking about this

Pollard slotted another penalty immediately after the break. A cynical infringement by Faf de Klerk resulted in a yellow card, yet somehow the Bok defence managed to keep the Pumas honest during the period of sanction.

Then Erasmus went to his bench. The Boks lifted their effort in the latter stages and the Pumas had no response.

Pollard scored his second, while Makazole Mapimpi and Cheslin Kolbe also crossed the line to edge the visitors into bonus-point territory.

The result sees the Boks maintaining their unbeaten record in 2019. They will play Argentina in a friendly at Loftus Versfeld next week before departing for Japan at the end of August.