Hamilton: It was completely my fault

Lewis Hamilton has apologised to his Mercedes team for the pit-lane blunder that cost him a shot at victory in Bahrain on Sunday.

Hamilton’s chief rival, Sebastian Vettel, is now the sole leader of a championship that has all the ingredients of becoming a classic after claiming his second win from the opening three rounds.

Vettel’s margin of victory over Hamilton under the floodlights of the Sakhir Circuit was 6.6 seconds. He should have been much closer to the Ferrari driver but for a rare unsportsmanlike moment.

Knowing he would have to queue behind teammate, Valtteri Bottas, at the first round of stops, Hamilton crawled into the pit lane, slowing down to just 35mph, in a ploy to prevent Daniel Ricciardo from getting past. The race stewards didn’t like Hamilton’s actions – declaring he drove ‘unnecessarily slowly and erratically’ – and slapped him with a five-second timed penalty.

The punishment left Hamilton with too much work to do and while his late salvo rescued second place, Vettel cruised to victory to move seven points clear of the Briton.

‘It was completely my fault’, Hamilton said. ‘You are supposed to have a five-second gap to the safety car and I think I had a four-second gap, so it was just a misjudgment from myself.

‘I had very good pace in the second and last stint, and honestly believed that I would be able to catch Sebastian up. But with the five-second penalty, that made it twice as hard than it was already going to be’.

‘Like I said, apologies to the team, but I tried my best to recover it. We still got good points and we still have this great fight as Sebastian did a great job.’

Vettel certainly did just that. First, when the German, starting third on the grid, blasted out of his blocks and made up the 9m difference to Hamilton by the time he reached turn one. Vettel was braver on the brakes and passed Hamilton around the outside. Then Ferrari blinked first and pitted Vettel. The undercut worked to perfection, with Vettel taking charge of the race – even though the safety car was deployed moments later after hapless Canadian rookie Lance Stroll crashed into the Toro Rosso of Carlos Sainz – with 12 of the 57 laps gone.

The result rarely looked in doubt from that point on, with Vettel bidding to become only the third driver to win five or more championships in the sport’s long history, punching the air as fireworks greeted his 44th career victory.

‘It was a really great day,’ Vettel said. ‘I don’t know what to say. The last half of the in-lap with all the fireworks and the track was all lit up – I just love what I do – and I can’t find any words.

‘I am not really looking at the championship. I am really enjoying the car. I was a bit down yesterday because the gap to Mercedes was so big and we could have been a bit closer.

‘But something inside me told me we had a good car and we can do well, so right from the first lap I felt the car was there and the Easter hunt was on. They were hiding some eggs but it looks as though we found them today.’

After claiming the first pole position of his career, Bottas said the fight for the championship was now a three-way battle, but the Finn will be desperately disappointed here after he finished a distant third.

A problem with the Mercedes generator on the grid left Bottas with too much air in his rubber during the opening stint and while he managed to stay in the lead, he was painfully slow.

Later in the race,  to add insult to injury, he was told by his Mercedes team to get out of Hamilton’s way.

‘Honestly, as a racing driver it is the worst thing you can hear’, a deflated Bottas said afterwards. ‘I did it because there was potential Lewis could challenge Sebastian. In the end it didn’t happen, but the team tried, which I completely understand. But personally it is tough to take’.

Kimi Raikkonen crossed the line in fourth with Red Bull’s Ricciardo fifth. There was more misery for McLaren after Stoffel Vandoorne failed to start, while Fernando Alonso failed to finish.  Britain’s Jolyon Palmer started a career-high 10th, but finished 13th and last of those who got to the end. 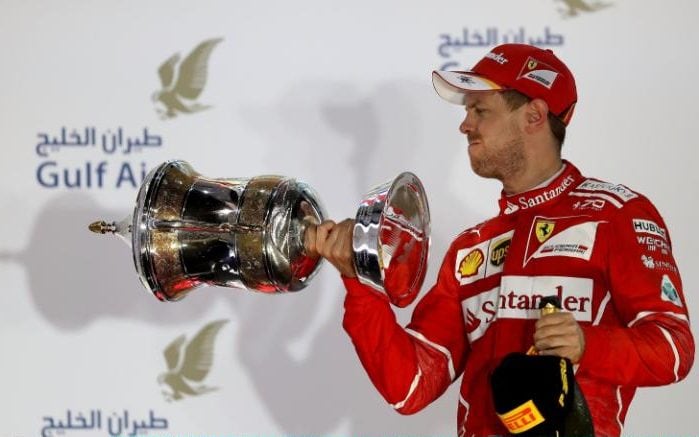 But that is only the third race of a very long season. But there will be lots of twists and turns before we get our champions.

More success to follow for Pitso after double treble with Sundowns, Al Ahly

After securing a historic double treble this season with Mamelodi Sundowns and... END_OF_DOCUMENT_TOKEN_TO_BE_REPLACED

No limit to what the Springboks can still achieve

It’s been a year of unfortunate interruptions, but the Springboks still have... END_OF_DOCUMENT_TOKEN_TO_BE_REPLACED

In the second instalment of a six-part series, Jon Cardinelli highlights the... END_OF_DOCUMENT_TOKEN_TO_BE_REPLACED

In the second instalment of a series looking at our favourite World... END_OF_DOCUMENT_TOKEN_TO_BE_REPLACED

Signs of life for Proteas

There is finally some good news for cricket fans to cheer about... END_OF_DOCUMENT_TOKEN_TO_BE_REPLACED

The Proteas wasted vital opportunities to test new talent in preparation of... END_OF_DOCUMENT_TOKEN_TO_BE_REPLACED

Kaizer Chiefs’ progress under coach Giovanni Solinas has been severely diminished, with... END_OF_DOCUMENT_TOKEN_TO_BE_REPLACED

A lack of competition in the Rugby Championship, and the demise of... END_OF_DOCUMENT_TOKEN_TO_BE_REPLACED

The signs have been there for a number of years but the... END_OF_DOCUMENT_TOKEN_TO_BE_REPLACED

Match officials should be allowed to use some common sense when adjudicating on... END_OF_DOCUMENT_TOKEN_TO_BE_REPLACED